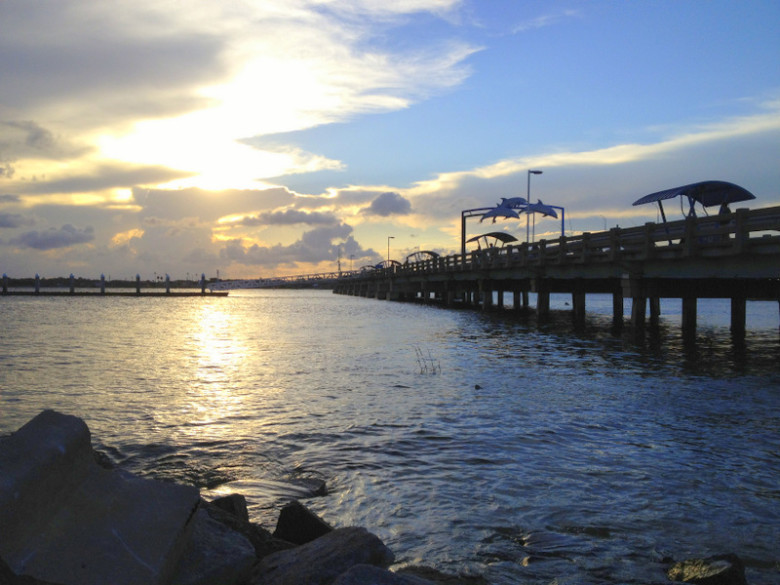 On Thursday at 6 p.m. there was a convergence of three art groups at the Vilano Beach Pier.  The ASA, Art Studio Group, and PAASA were all represented.  Kathleen brought her friend Martin who is an artist visiting from Great Britain.  Although he felt very out of his element, being a portrait artist, he took up supplies and just got with-it for shore-lined views under the pier.  We worked against a bit of nature with rapidly changing light, wind and an incoming tide.  Jim had new gear to test for his oil set-up and opted to try the beach side of Vilano for a rendition of the eve light against the waves.  He donated an Artograph Opaque projector for our art group to utilize with the next mural project.  We worked independently for about 1.5 hours until the splendor of the setting sun created sun shadows in the clouds and vibrant hues of orange yellow and pink.  The transitions happened so quickly we pondered pre-mixing a palette just to be ready for the colors.  As one looked to the east there were pinks and pale blues, and to the west an extreme transition of sun-cast linings and layers of colors.  One word…Wow.

Related Posts
Drawing inside Villa Zorayda
The Anonymous Artists had much to see and draw at the Villa Zorayda Museum this…
Coming up… ArtUNLEASHED
After a long day selling and showing our art at Ancient City Pride last weekend…
Second Sunday at the City Marina
With some of the nicest spring weather an artist could ask for, a band of…