This drawing is of Francis I who ruled France when the explorer Jean Ribault settled Fort Caroline just north of Jacksonville around 1564.  He was ruling when Pedro Menendez settled St. Augustine and faced off with French soldiers to claim Florida as an extension of Spain.  This rendering was from a solid oak carving found on the first floor of the Lightner Museum.  A sister statue of Charles I, also carved from solid oak, can be found on the second landing of the swimming pool.  The detail of this statue includes the golden fleece, representing an organization that included most rulers of Europe even though they were enemies.  (As an added note of local history, the golden fleece emblem can be seen in the bas-relief over the entrance of the Castillo de San Marcos.(  The dragon type creature on the top of this statue’s helmet is a salamander.  This was the symbol of France.  The salamander was chosen for two reasons.  The first being the longevity of it, living almost a hundred years.  The second reason is that salamanders were rarely killed in fire.  This information was compliments of one museum volunteer.  Go visit the Lightner Museum! 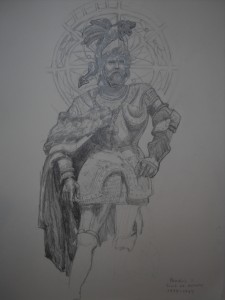 Related Posts
Shamrocks at Ann O’ Malleys
My last day of painting lessons in Lisdoonvarna.
This last week has been remarkable, the land, the people and the opportunity to churn…
Sunday painting at City Marina