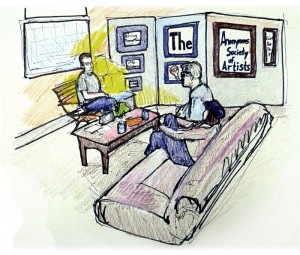 In 1874 an exhibit in Paris called the “Anonymous society of artists painters, sculptors and printmakers” began what we now call Impressionism.

As a result, artist’s newfound understanding of science, color theory and natural light, challenged the dominance of salons, academies and galleries. Once considered primitive, Impressionism and its successors became modern art and continue to inspire us a century later.

Today, art is once again at a turning point. Technology, a wierd economy and a complicated culture are changing society. The influence of television networks, newspapers and universities are dwindling. Art and music have moved online, off wall and a keystroke away from the market.